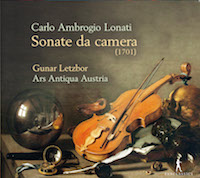 A colourful figure in late 17th-century Italy, Carlo Ambrogio Lonati sang comic roles in Cavalli operas, was perhaps the lover of Stradella (possibly involved in his murder), and earned the nickname of “the Queen’s hunchback” while a violinist in the service of Queen Christina of Sweden. These violin sonatas, published in Salzburg in 1701, are old-fashioned for their date but are full of invention: they look back to Biber in their unusual tuning of the violin strings; the first rises over an unearthly single note, and the last of the four is a lively chaconne with endless variants over a four-bar theme. Fine, vigorous playing from Gunar Letzbor.

[…] The final work from the set is simply labelled “Ciaccone” and goodness, what a beast of a movement it is! Variation after variation before the style switches completely for a couple of short movements then off the chaconne goes again, ever more intricate, ever more demanding ‒ either the violinist had a page-turning assistant or his part must have been written out on enormous paper. Letzbor’s lightness of touch and deft bow work bring out all the subtleties in the music, far and away the very best playing I have ever heard from him. The continuo line-up of keyboard, lute and 8’ violone provide an unfussy aural backdrop that throws the always interesting solo line into relief. The scores are readily available online – following them merely underlines Letzbor’s equalling Lonati’s wizardry.
Brian Clark